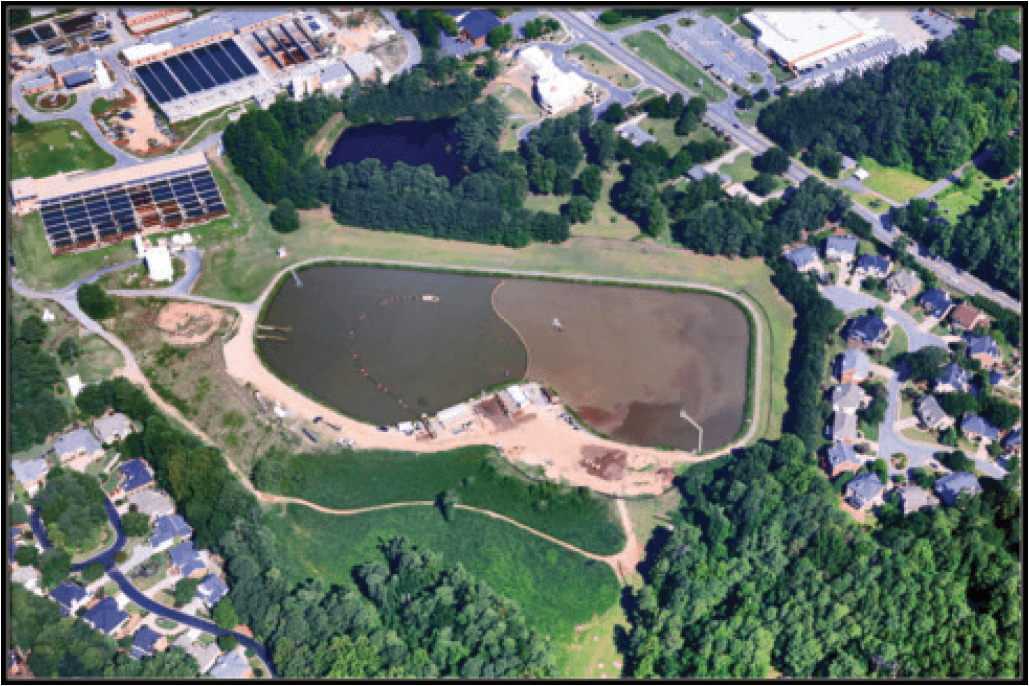 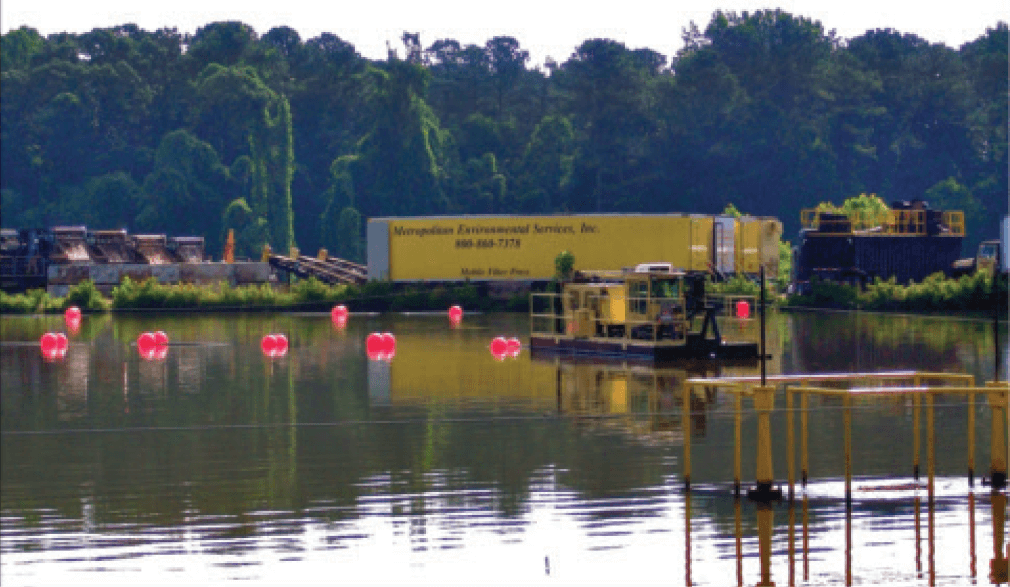 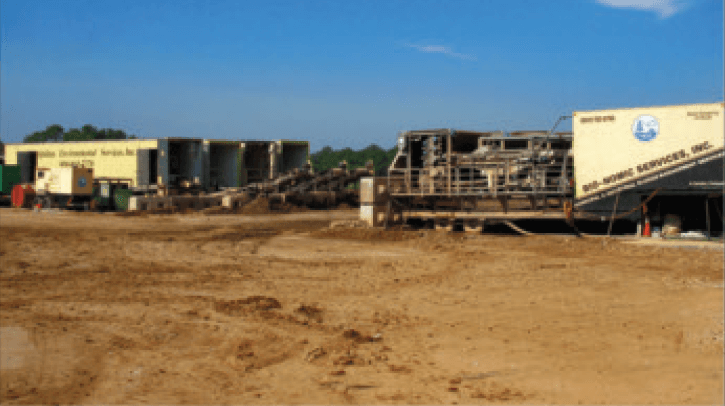 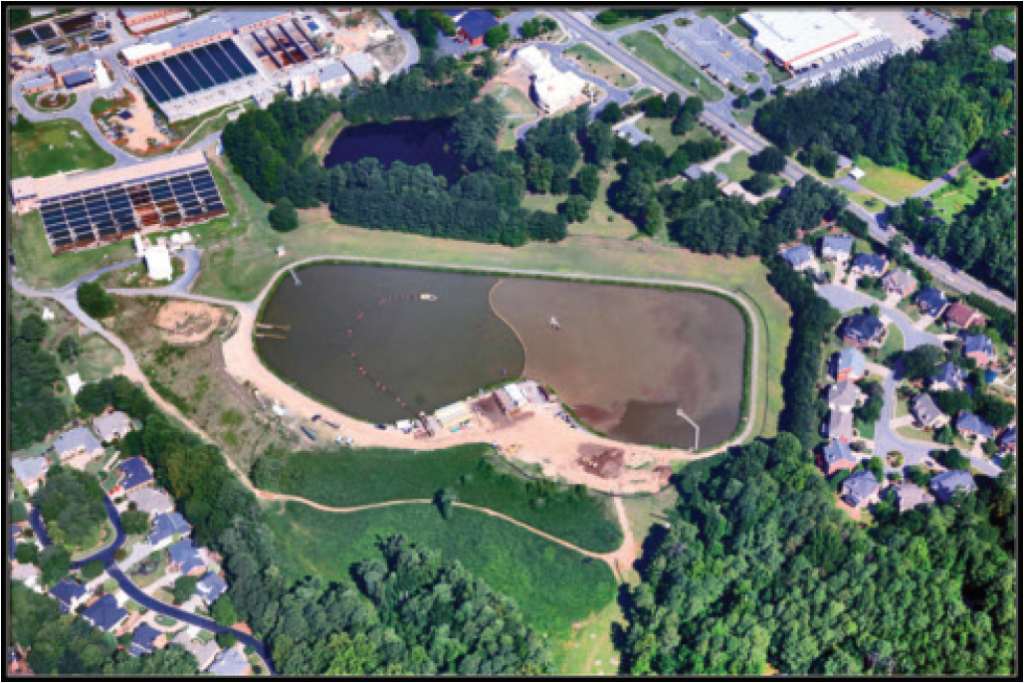 Experienced public works directors don’t need a crystal ball to see into the future. When the U.S. EPA (Environmental Protection Agency) established new water quality regulations in 2005, the public works officials in CobbCounty, Georgia (GA), knew that major rehabilitation work at their water treatm ent plants was on the horizon.

The Cobb County-Marietta Water Authority (CCMWA) in suburban Atlanta recently completed the largest dredging and dewatering project in their long history. The project was compressed into half the time it would normally have required in order to meet construction deadlines necessary for the district to be in compliance with new EPA guidelines. The effort by the CCMWA and its contractors and partners is a study in thoughtful planning and perfect execution, and serves as a model for other district s facing similar deadlines.

The Stage 2 Disinfectants and Disinfection By-product Rule (Stage 2 DBP rule) of ‘05 tighten the requirements for two groups of DBPs – trihalomethanes (TTHM) and haloacetic acids (HAA5). A major Stage 2 deadline occurs in 2012, and public works departments across the country are now hard at work to make sure they are in compliance when the time comes.

The CCMWA serves 350,000 people and has two water treatment plants and reservoir built in 1952. To meet the new Stage 2 standards, they had to add granular activated carbon filters to their treatment processes. This will require taking one plant at a time off line during the construction phase, greatly reducing treatment capacity and system redundancy.

During the planning phase of the project, engineers determined that they needed to take an important preliminary step before they began construction at their treatment plants. The Quarles Raw Water Reservoir was found to be half filled with sediment, creating both treatment and capacity issues.

The reservoir serves as an equalization basin between the Chattahoochee River and the CCMWA’s two treatment plants. Built in 1952, it was designed with a capacity of 25 million gallons. However, since its last dredging in the mid-1970s, sediment flowing in from the river and from treatment “backwash” from the plants had reduced capacity by half. Sediment often found its way into the treatment plant, reducing treatment efficient and potentially affecting water quality and creating process issues. Furthermore, the engineers wanted to ensure adequate reservoir capacity during the construction phase at the treatment plants, as low water levels combined with reduced treatment capacity could result in water shortages for the district’s residents.

“It’s a little like a family with two cars,” explained Thomas Ginn, P.E. , the process engineer for the CCWMA. “If one car has mechanical problems, you want to make sure you can share the other car. We had to make sure we could meet water demand while each of our treatment plants was shut down. Restoring capacity in the reservoir was the first step.”

Initial tests of the reservoir indicated that this would be a big job. The reservoir contained an estimated 68,000 yd3 of sediment and treatment plant residue that would have to be pumped out and dewatered. Because the sediment contained treatment residuals such as alum, the dewatered cake would require disposal at a Subtitle D landfill, so extensive trucking would be involved. The reservoir is located near a residential neighborhood, so noise and traffic were important factors. There also was the issue of coordinating the work at the reservoir with work going on at the James. E. Quarles Water Treatment Plant. Limited street access to the plant could potentially cause congestion as trucks came to and from the plant during the day.

“This project required extensive planning and coordination,” said Andrew Lovejoy, P.E., of Civil Engineering Consultants of Marietta, Georgia. “Because of the work being planned at the two treatment plants, we had a very difficult deadline to meet, about six months. There are very few contractors who could take on a project of this scope. We had five bidders and all five of them recommended the same two companies as their subcontractors – Bio-Nomic and Metropolitan.”

Heavy Constructors, Inc., of Marietta, Georgia, was awarded the job and they immediately called in Bio-Nomic Services and Metropolitan Environmental Services, which are sister companies in the Carylon Corporation. For most dredging and dewatering projects, only one subcontractor would be needed, but the timeline for this job required both companies working simultaneously.

“A job of this size requires big mobilization, and only a few companies can handle it,” said Peter Fleetwood, president of Bio-Nomic Services. “A lot of big, expensive equipment is involved, plus a lot of project coordination. It’s very important to have experience with jobs like these.”

Dredging and dewatering the Quarles Raw Water Reservoir in a six-month time frame meant doubling the equipment normally used for a project like this one. In this case, Bio-Nomic Systems brought in four mobile belt presses and Metropolitan contributed four recessed chamber presses. For the first time, floating dredging equipment was put into the reservoir – the only previous dredging work was accomplished from the bank. As the sediment was removed it was dewatered, then the resulting cake was trucked to an approved landfill. The entire project was choreographed so that the fleet of trucks did not excessively interfere with neighborhood traffic, nor did they impede the trucks arriving at the treatment plant for preliminary construction work there. Also, as part of the contract, trucks were required to be kept clean so that mud was not tracked onto neighborhood streets. There also were noise and odor restrictions to comply with.

“These guys, Bio-Nomics and Metropolitan, really are experts at this,” said Lovejoy. “It takes a lot of expertise to develop and execute a big project like this one. I don’t think there have been any complaints from residents during the course of the work.”

Shortly after the dredging work, engineers took the opportunity to drain the reservoir to do some armoring and maintenance work on the banks and sluice gates. Total price tag for this phase of the work – the dredging, armoring and maintenance – was just over US$4M. CCMWA will incur no debt on the work, as the project was paid for out of their capital improvement program funding. One of the lessons learned by CCMWA is the need for regular dredging of the reservoir. One benefit of regular dredging is economics – greater capacity in the reservoir reduces the amount of pumping necessary to bring water from the Chattahoochee, thus saving electrical costs. Also, doing a smaller dredging project every five years or so will eliminate the need to do a massive project such as the one just completed.

“This (the reservoir dredging project) will decrease the potential for water quality problems or process issues at our treatment plants,” said Ginn. “It’ s a very good proactive preventive maintenance step.”

The dredging and reservoir rehabilitation project ended just in time for serious work to begin at the treatment facility. Thanks to careful planning and experience, CCMWA will be able to meet its Stage 2 deadlines and have a more efficient, cost-effective water treatment process.

Back to Search Results